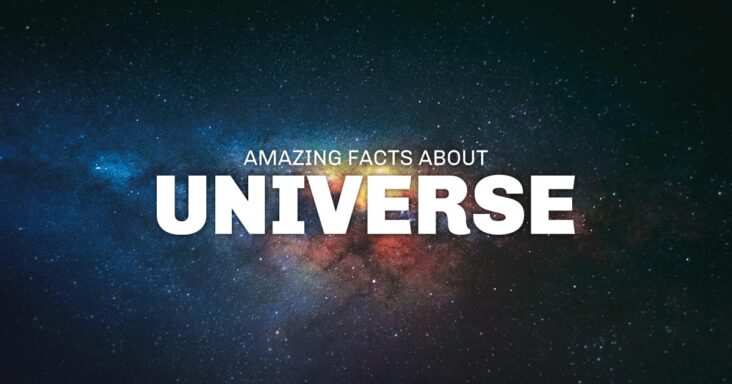 In this article, we will talk about the 10 amazing facts about the Universe!

Universe- Something that began with an explosion known as Big Bang where due to extremely high density and temperature when cooled, multiple elements were formed.

All that we see and hear and feel is only 4% of the total that this universe carries beneath. As per what we have seen till now, there is only one universe, however going beyond sight and relating theories, there are many universes that exist.

Start from asteroids to planets to stars to galaxies that are a part of one universe and can lead to infinite difficulties for a human mind to ever know.

This brings us to thoughts like how many Universe could be existing actually.

As Physicist Steven Weinberg said in “Closer To Truth”, “universe means the whole thing, however when we talk about Universe, we refer to the Big Bang and to the things we see in the observable universe.

The question arises – Are there multiple Big Bangs?

Could there be multiple Big Bangs in different senses?”

To know some more things regarding our home – Universe, let’s go through the 10 facts we have brought that would make you think and love your home even more.

10 Amazing Facts About the Universe

Fact #1: Universe has an age

Yes, that’s true that even the universe has an age as it has not been forever and was born by Big Bang.

As per the scientists, it’s ~13.8 billion years old and has gone through multiple phases and formation to be what it is today.

Age is estimated by two major factors, i.e., by looking at the oldest stars and by measuring the rate of expansion and inferring back to the Big Bang.

Fact #2: Universe has a smell

This was an interesting part to be found as we never thought of a specific smell of the universe.

However, the smell is not very pleasant as 95% of the universe is Hydrogen, Helium, and other concentrated chemicals which have unpleasant smells due to Sulphur and Ammonia.

Hence, the universe can be smelled as rotten eggs mostly.

Fact #3: Stars have a Birth rate too

Stars being very heavenly bodies are formed every day in the observable universe.

Fact #4: We are traveling the universe

I know this is difficult to believe, however, said to be true.

Our solar system i.e., our Sun and its 8 planets travel around the Milky Way Galaxy and completes one round every 240 million years.

Even the Milky Way galaxy is traveling around the intergalactic universe.

Fact #5: Universe has a shape

As per the theory of general relativity, the universe can take one of three forms; flat like a table, closed like a sphere, or open like a saddle.

As per cosmologist David Spergel “The shape of the universe tells us about its past and its future”.

Even this is stated that the age and future of the universe are to be found and tied back to its shape.

Fact #6: Eyes can see the stars

There are billions and trillions of stars in the universe, however as observed, researched, and found that a naked human eye at once can only see 9096 stars in the sky which is not even a pebble in the total population.

Many stars that are seen in the sky have died years ago, however, seen due to their distance from us while their light was traveling.

Our solar system that lives in the Milky Way galaxy has a star called Sun. Sun is revolved around 8 giant planets including Mother Earth, however, also carries some dwarf planets as well.

As the name suggests, these planets are very small and have not cleared their neighborhood around their orbit, and are not a moon.

Scientists have found 6 dwarf planets now and Pluto has been classified as one in 2006.

It’s good to gain, however to what extent and how is the major question?

Based on the observations over the years with the increase in distance between any two gravitational unbound parts with time, it is found that the Universe is expanding.

Fact #9: Collision of the Galaxies

Sounds like a movie, however, it is a truth discovered by our scientists that our galaxy will be colliding with one of its neighbors.

When galaxies collide, new stars are formed as gases combine and they together create a new galaxy. The Milky Way galaxy will be colliding with Andromeda galaxy around 3.75 billion years from now.

Our solar system was formed around 4.6 billion years ago from gas and dust called the solar nebula.

Planets near the star (Sun) are made of heavy materials and have more rocks as their gas is blown off by Sun’s winds.

They keep forming from being too small by circling their star and joining different gases and dust.

How many of these facts about the Universe did you already know? Put your views in the comment section below.